These devices are used to separate in the most efficient manner the very fine drops carried away by a gas or steam, either at a boiling stage, vacuum evaporation or bubbling of a liquid.

In fact there are two phenomena, one mechanical and one physical, but no filtration at all since the size of the held drops has no link with the infinitely greater size of the pore or open space. . The head loss or gass passage resistance is practically imperceptible, however demisting can reach up to 99% efficiency.

A demister reaches the highest efficiency when the speed of a gas or steam ranges between certain limits: 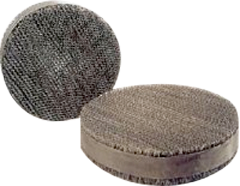 Once the highest speed has been reached it is possible to set both the best and the lowest speeds of the demister, setting respectively to 75% and 30% of the Vm to get aboye mentioned speeds.

Low speeds rather than high speeds affect the efficiency of a demister so, if necessary, it is always advisable to operate at high speeds.

When the very fine drops of a liquid are carried away upward by a gas at a determined speed through the labyrinth of a porous structure there are sudden changes of the sense of direction which send out, by inertia, these drops against the meshes. This causes a coalescence phenomenon that makes them gather in bigger drops and, by gravity, fall down to the bottom of the vessel or separation tower. 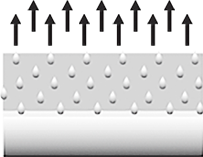 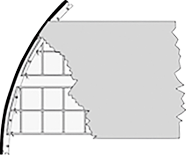 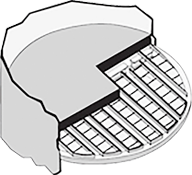 The use of knitted wire meshes in the manufacture of demisters involves many advantages, mainly:

Contact us for more information
This page uses cookies to analyze traffic. If you continue browsing, consents to its useAllow cookiesRead more